HUSTLE2015 is not your grandmother’s fundraiser.

Last night hundreds of guests found their way through Calgary’s back alleys to Standard Modern Speakeasy, where flaming shots and shirtless bouncers welcomed them to the sold out HUSTLE to benefit local charity Mealshare, as supported by the International Special Events Society. As we’ve previously noted, Mealshare is charitable organization founded by Calgary natives, Andrew Hall and Jeremy Bryant, which aims to end hunger for needy families. “When you order a Mealshare branded menu item, you receive your meal just as normal, AND someone in need receives one too! Mealshare provides [these] meals through local and international [charitable partners].” Jeremy Bryant, Co-Founder of Mealshare, and Debbie Newman, Executive Director of the Calgary Drop In and Rehab Centre Society

In 2014 Mealshare was in four locations. Barely a year later, they are now in forty cities, with sixty three locations across Canada, and has partnered with national chain Original Joe’s. “That’s probably my favourite part,” said Lisa Marks, immediate past president of the International Special Events Society, and chair of HUSTLE, “The incredible growth”. With over two hundred and fifty thousand meals given away to date it’s obvious Mealshare is serious about reaching their goals. When we asked them what was next for the charity, Andrew’s answer was immediate. “Expansion. We’re looking to extend into the United States, which is the main fundraising goal tonight”. Derek MacDonald, writing on the donation wall. Guests had the opportunity to donate to Mealshare, and then ‘tag’ the donor wall with their name. 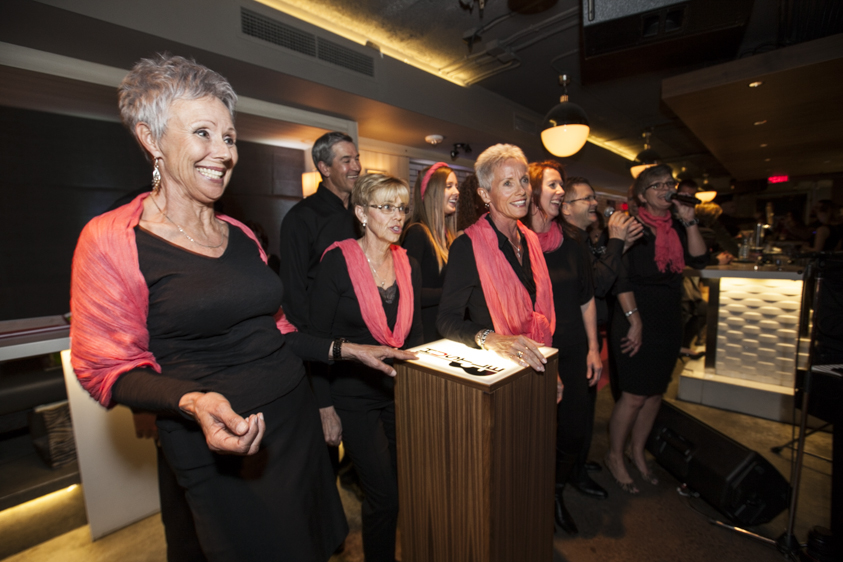 As an event that has food at its heart, we weren’t surprised to see an abundance of delicious and gorgeously plated canapés, supplied by the incredible by some of Calgary’s top chefs. It wouldn’t be HUSTLE without a fair share of leather. In addition to the plethora of rugged biker jackets and shiny leatherette leggings that were strolling throughout the venue, many guests were seen sporting the leather-centric jewellery styling’s of Kat Marks’ LethrBar. Leather bracelets and other items in bold colours were available for purchase, and guests could either watch as someone imprinted their initials onto the piece, or could actually be taught how to do it themselves. The event cumulated with a live auction, and ultimately raised $13,000.00, a very impressive number for just its second year running. We can’t say we’re surprised though; when you combine world-class food and cocktails, a sexy, underground venue, and- of course- a charity with not only a dream but the grit to make it happen- incredible things are bound to happen.