#EventInReview: Beakerhead and Trico Present “The World of Social Entrepreneurship” The crisp fall air mixed with the smell of smoke fills your nose as you walk past two 10 foot metal lilies, fire spewing from their steely petals. Passing the Blazing Lilies, you make your way along a field of softly glowing white balloons, dancing and pulsing in synchronization while hundreds of people crowd around, pointing, smiling, lifting little ones over shoulders for a better view. You come to a large crowd and survey the diverse group; laughing grandparents with bulky cameras around their necks; glow-painted teenagers huddled in small, chattering groups; tiny children excitedly clutching family members hands, craning their necks to see past the throng. You wonder what could have brought such a range of Calgarian’s out on a warm, September Saturday, when suddenly an eight foot tall robot lunges onto the stage. The crowd stares up exepctantly as lights wash over their faces. The robot turns to face the group, lifts his arms, and “WOOSH”, the crowd gasps with collective delight as they’re blasted with cool mist rushing out of the robot’s mechanical arms.

The rest of the evening is a rush of fire, smoke, mechanical wonder, and engineering dreams. As you begin making your way home a few hours later, ears and eyes still filled with the visual smorgasbord you just witnessed, you wonder what on earth immersive, futuristic world you just left. This world, dear explorer, is Beakerhead. The ShelterBox tent and Survival Capsule at Beakernight

The fourth annual Beakerhead took over Calgary this past September, with works of science, art, and engineering exploding all over the city via public pop ups and specialty events. The Boom team was thrilled to once more work on Beakerhead’s social impact brain child, the Trico Charitable Foundation‘s “World of Social Entrepreneurship”. This series featured; Autism Glass, an Artificial Intelligence that uses the Google Glass platform and their own emotional recognition technology to read facial cues; Lucky Iron Fish a small, iron fish that helps reduce instances of anemia; LuminAID, pack-flat, solar, inflatable lights; ShelterBox, pop up, emergency shelters with renewable energy sources; Survival Capsule, a 300 pound tsunami-proof orb; and VeloMetro, a kinetically powered bike, that keeps you protected from the elements! 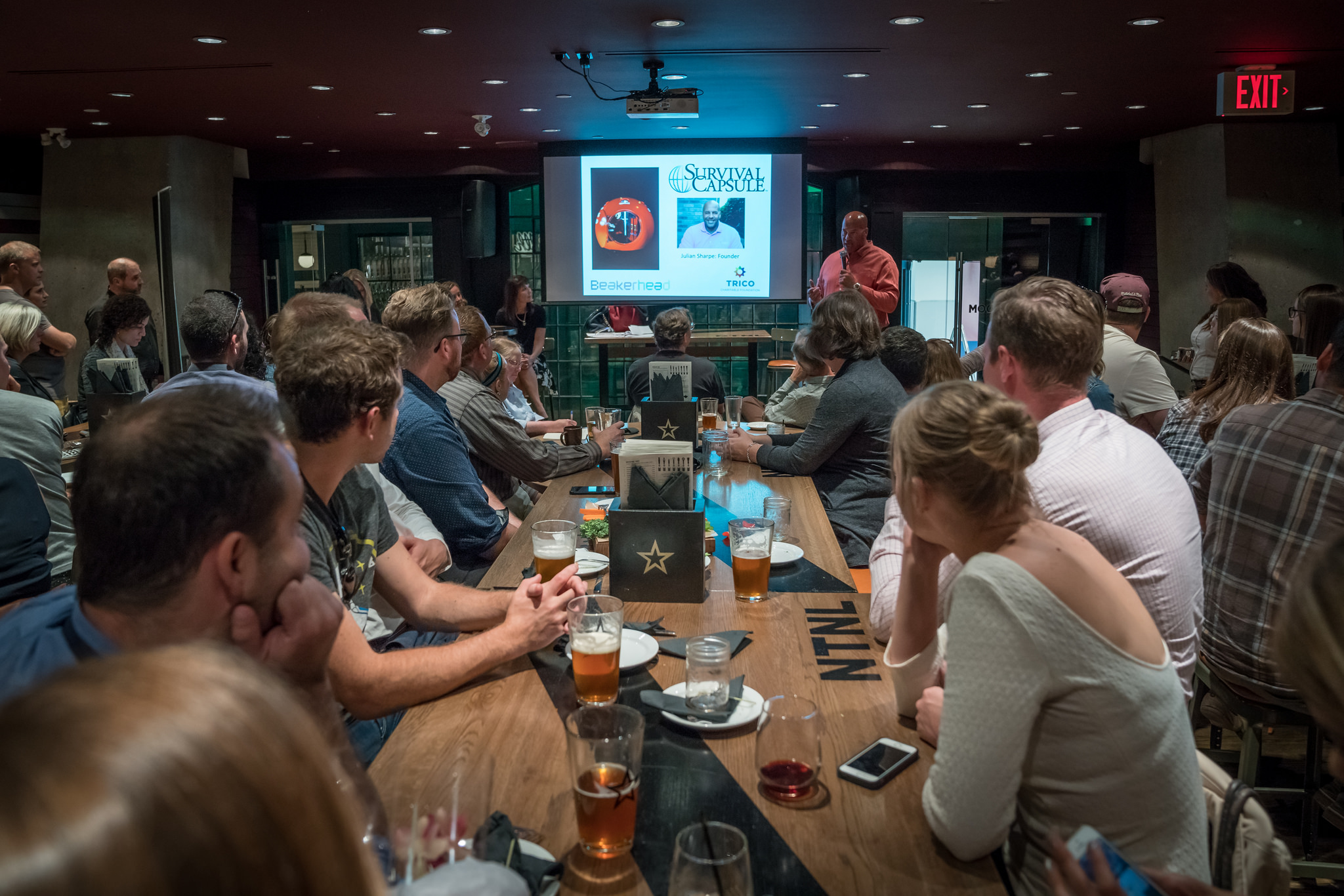 The World of Social Entrepreneurship Panel Want to get to know these incredible presenters- and what they did at Beakerhead- better? Check out this great post by Boom friend, Mike Morrison!

Thank you to everyone who participated in this crazy, wonderful smash-up! We’re hanging up the lab coat for now, but we’ll see you next September!